3 Pain Triggers You May Not Know 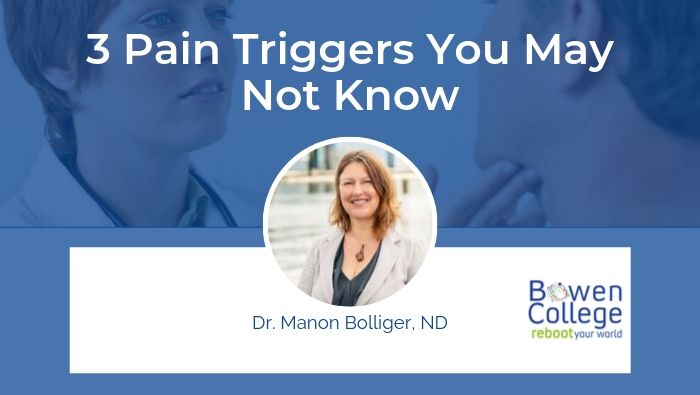 Pain, believe it or not, serves an important purpose in our bodies. It warns us of dangerous things like sharp objects and fire. Without it, we wouldn’t be able to gauge safety. Like a fire alarm, it alerts us when things go wrong. Yes, there are rare cases where a person feels no pain whatsoever despite injury, but more often than not, pain is a universal experience.

Yet sometimes this mechanism can go haywire in our bodies. Long after the injury is gone, the pain lingers as if the body is remembering the trauma. Living with chronic pain is problematic for many reasons. Beyond the agony, it affects subtle things like your posture, your movement and your mood.

Although everyone is familiar with the concept of pain, most people fail to realize how complex it truly is. It’s not just a physical sensation. It’s triggered by many other factors you may not even be aware of.

Imagine two scenarios. One man accidentally gets into a car crash. The other man is wounded in battle. Sure, both cases are incredibly painful. When it comes to physical wounds, they may both suffer the same amount of pain. However, when you think about the emotional context of war, everything changes. See, the emotions that come with those wounds do affect how a person feels about them.

Another example is when a firefighter gets injured while saving a life. Since he doesn’t victimize his pain, his experience is going to be very different. Somehow the body can regulate pain based on its emotional responses to it.

Despite research in neuroscience, mental triggers are often dismissed as “placebo.” Somehow it’s a very misunderstood concept. Let’s say a woman is diagnosed with an illness. As the doctor writes down the prescription, she’s told many terms she doesn’t quite understand. Her mind races thinking about the worst possible outcomes. Negative self-talk causes her to spiral down the rabbit hole imagining the pain to be worse than it is.

Now compare this to an athlete who is trained to visualize outcomes. Despite the physical abuse their body has to go through, they can focus on their goals. It really is mind over matter in this case. Positive thinking can go a long way when it comes to being able to endure and cope with pain.

As social creatures, humans often mirror each other. Think about the child who falls down. For a split second, the child looks at his or her parents for reassurance. If the parents are freaking out, the child may actually end up crying even more. Whereas if the child is raised in a calm environment, the child may learn to handle the pain and get back up. Of course, there are many other factors involved, but this is just to illustrate one example where we see this.

The same is true with a lot of things. For example, why are some people afraid of dentists but not others? It’s possible they witnessed someone in pain, so now they associate it with pain. Beyond simple emotional and mental triggers, they’re mirroring it based on social cues. They see other people’s body language, and they brace themselves for the worst.

The bottom line is not everything is logical.  Some things are psychological..

When providing a healing environment, it’s important to cultivate trust and comfort. This is why treatment can’t just be a mechanical process. As a therapist, it’s crucial to respect that the body is an integrated system. When people feel calm, it helps them release the pain they’re carrying.