Are We Addicted to Being Sick 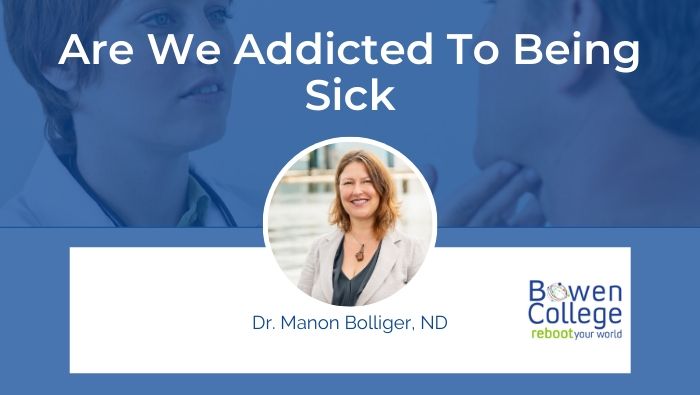 “Oh, you didn’t sleep last night? That’s nothing. I’ve been working overtime for three days in a row.” Some people treat their pain like battle scars. They try to prove themselves by powering through the day. When they’re tired, they take caffeine. When they’re sick, they pop a pill. Sure, they hate the feeling, but it’s as if they secretly love complaining about it. The body is taken for granted as people run the rat race.

For many, living a gray life has become the norm. Clock in and clock out. If something hurts, numb it down with medicine and ignore it. As symptoms grow worse, they’re told, “You’re just getting old.” When the body finally breaks down, they empty their pockets spending thousands on health care. This mentality is a pervasive sickness in society, so why doesn’t it stop?

1.  Being sick makes some people feel cared for.

Think about it. Children who grow up in busy households rarely get attention. Yet when they’re sick, mom and dad are suddenly there. They get to stay at home and rest. They’re bundled up in soft warm blankets, and they’re served a bowl of piping hot soup. It’s not that they enjoy getting a runny nose and a fever. On a deep subconscious level, this is the only time they truly feel seen, heard and cared for. Somehow they’ve taught themselves that being sick gains sympathy from others.

What they don’t realize is that self-care is always within reach. They can feel loved when they eat right, exercise and rest. When they’re healthy and strong, they can actually enjoy more out of life with friends and family.

Humans are social creatures. Despite having individual personalities, they’re wired to mirror one another. Nobody wants to feel left behind. Nobody wants to feel like they’re not doing enough. When there’s so much pressure to keep up, people aren’t willing to slow down and listen to their bodies. They’re busy worrying about what other people think.

Because of this, there’s a growing dependency on pharmaceuticals. Nobody wants to face the real reasons for their symptoms. They just want to sweep all the pain and discomfort under the rug. They want to go through life pretending like everything is fine. There’s a strange sense of guilt that if they allow themselves to properly heal, then they’re somehow being selfish.

Yet the key to tapping into their fullest potential is their health. Releasing the pain actually allows them to be more focused and driven. They’re able to think and act with greater clarity and strength.

What do you do once you’re healed? Nobody wants to live in pain, yet many are stuck in the victim-mentality. They wallow in a pity-culture. There’s this notion that they can’t afford a healthy lifestyle. They say, “Medicine is expensive. Good food is expensive. There’s no time for exercise.” What they don’t realize is the body already has everything it needs to heal itself. All they have to do is look within.

This, of course, requires a radical shift in thinking. Many people have been conditioned to rely on drugs. It’s a learned helplessness as they become disempowered by the system. In reality, their bodies are fully capable of healing. They just need to listen to it.

Yes, change is scary. People need to unlearn old habits and learn how to trust their bodies. That means cutting out the external chatter and tapping into their intuition. That means empowering themselves to heal and realize just how strong they truly are. When people learn to heal, they’re able to live happy meaningful lives.