Casualties from the War on Symptoms 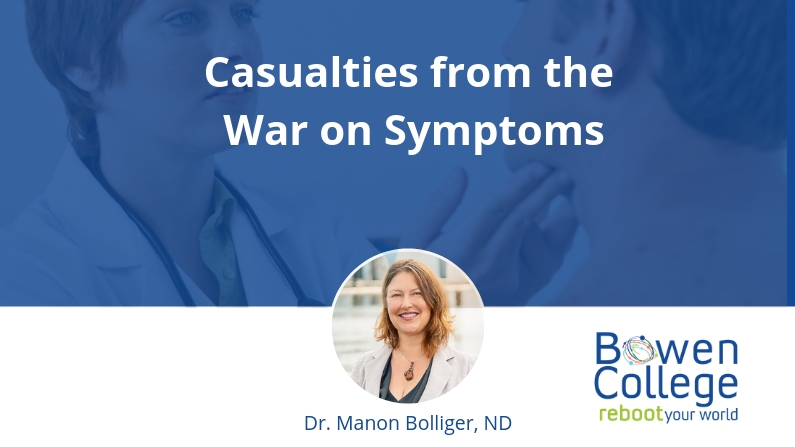 In my last post I left off by raising the question of what doctors can do to change the misguided and harmful obsession with symptom relief in our healthcare system. The first step may well be simply coming to terms with the situation.

For most people in the Western paradigm, the underlying assumption is that SYMPTOMS ARE THE ENEMY. Symptoms are seen as the cause, not an expression of the body. The body is viewed as the victim of these manifestations.

Symptoms are seen as attacking and fighting the body, driven by some outside force for which the body has little responsibility. The war on symptoms, or pain, resembles real war: two factions are seen as separate and at odds, rather than as intrinsically interconnected and dependent on a greater consciousness and desire for real change. Possibly the same financial interests that keep wars alive are also the backbone keeping the “war” on our own body an accepted feature of our health culture.

We have already witnessed the incredible death tolls that result when we oversimplify the debate about health to a choice between symptoms and no symptoms, pain and no pain. According to the 2003 medical report, “Death by Medicine,” by Drs. Gary Null and his colleagues, there are 783,936 annual deaths in the USA due to conventional medical mistakes. That’s the equivalent of six jumbo jet crashes a day for an entire year!

These are iatrogenic deaths. Those caused by the effects of drugs and errors of drugs, and not natural disease. This is the collateral damage of the war on symptoms. It’s already a red flag that things are gone astray. But there are even more dire conclusions to be drawn from this situation. We’ll consider those in my next post.