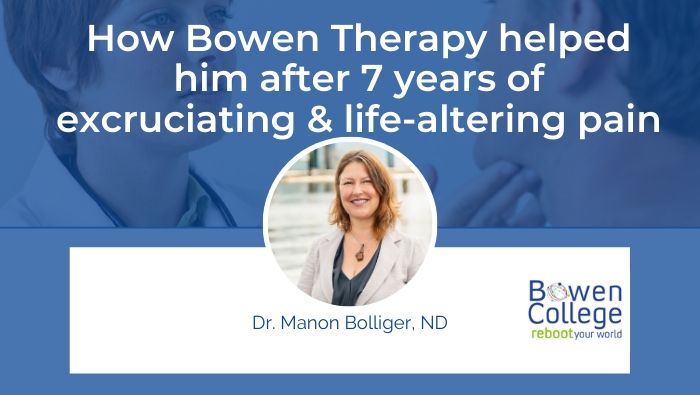 EDWARD’S STORY, A SURGEON & A CLIENT ~

How BowenFirst™ Therapy helped him after seven years of excruciating and life-altering pain:

Seven years before I met Edward, he had surgery to remove a brain tumor. His surgery lasted more than eight hours. Here is an excerpt from Dr. Manon Bolliger’s upcoming book,

“When he awakened afterward, he had terrible pain in his neck and felt as though his head were disconnected from his body. He felt like he had a massive weight on the back of his shoulders and neck to the point he had difficulty walking. His balance was precarious to the point he felt dizzy all the time. This condition continued, and Edward found no help or hope for his full recovery for more than seven years, this despite the fact that he was a surgeon himself.”

Dr. Manon used kinesthetic myofascial manipulation namely BowenFirst™ that uses gentle touch to allow the body to release the continuous loop of pain and restriction. Over the course of eight treatments from May 31 to August 14, she had Edward back to his pre-operative state. No pain, no dizziness, better balance, able to drive again, and more!

The new book is with a publisher now and should be out by Fall of 2020.