Is Self-Care A Chore? 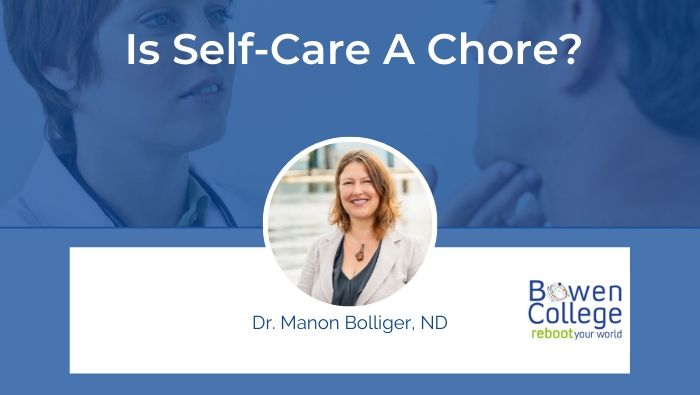 You wake up in the morning and make a mental list. Cook breakfast. Do the laundry. Wash the dishes. Take out the trash. Vacuum the carpet. Feed the pets. Add in a family of bustling children, and you’ve got yourself a circus before you head for work. All day long you’re surrounded with frantic energy. If there’s an award for multi-tasking, you’ve earned yourself a gold medal.

For every item you check off your list, ten more appear out of nowhere. As you’re slammed with work, you begin to wonder, “Am I running my life, or is my life running me?” At the end of the day, you’re drained and exhausted. You know you should be taking better care of yourself, but for one reason or another, you just can’t seem to get to it. The reality is self-care has simply become one more thing on your endless to-do list.

Here’s the irony of it all. The worst offenders are often people who are healers themselves. This not only affects their own health, but it severely impacts their energy as they work. Yet they brush it off to the side, and here’s why.

Healers are often empathetic people. They feel other people’s pain as if it were their own. Because of this, they often put other people’s needs before their own. Seeing others happy makes them happy, so they let their kindness overflow freely to other people. Yet, this makes them highly susceptible to being taken advantage of. When they’re sapped of their energy, they can no longer effectively do their work.

They need to ground themselves in their own self-worth. When they’re rooted deeply in themselves, they can establish firm boundaries with people. This doesn’t mean they stop helping people. Rather, this means they take care of themselves first, so they can do even more for other people. Like a healthy tree, they stand tall in their own power and bear more fruit.

They feel a twinge of guilt and shame.

At times, empathy can be confused with low self esteem. When people feel worthless, they often focus their care towards other people instead. Growing up, they’ve probably been told they’re a burden. Over time, they’ve learned to make themselves so small, so that others don’t feel their weight. Little do they know, their sacrifice is really a form of self-abandonment. It’s a symptom of a much deeper psychological wound in themselves.

Anxiety sinks into the pit of their stomachs. The silence and the stillness makes them nervous. It’s not that they don’t want to relax. It’s that they can’t. What if there’s something they forgot to do? What if they’re falling behind? What if there’s something they should be doing? The problem with anxiety is that it elevates fear and drowns out intuition. Most people are frantic because they don’t take the time to nurture that deep, still and quiet voice. Instead of being enjoyable, self-care turns into another panic attack.

Allow yourself to heal.

Healing is a process that starts from within. The body responds not just to physical touch but to the hidden emotional undercurrents. It’s important to let go of the burdens holding you back from your own self-healing. When you give time for yourself, you also become more capable of helping others.

How do you break the cycle? There’s really no right or wrong answer. You can go on a meditation vacation, take a brisk walk or start a new hobby. What’s important is that you allow yourself to hold space for healing.