No Pain, No Gain? Debunking 3 Myths About Healing 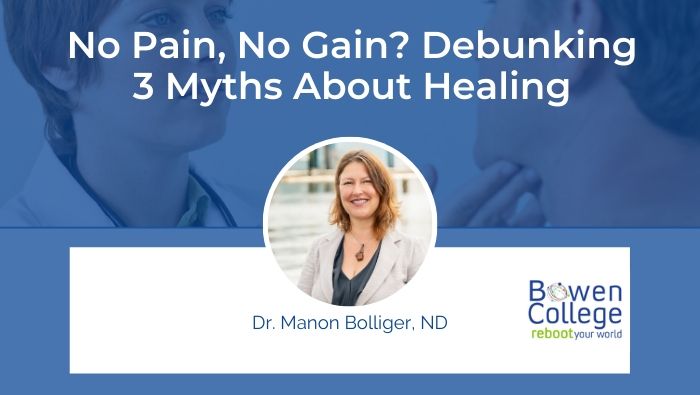 Trapped in gray cubicles, the average worker sits hunched over a desk all day. As time passes, there’s a crick in the neck, stiffness in the joints and pain all over. Yet like the artificial lights above, this becomes a “normal” part of everyday life. Most people have grown so disconnected with the way their bodies work. They’ve resigned themselves to popping painkillers without tackling the root cause. They’ve almost forgotten what it feels like to move freely.

There are many excuses why people never get better. A single trip to the doctor can burn a hole in their pockets. So many things have failed in the past they no longer bother. Worst of all, they’re overwhelmed by conflicting information.

MYTH #1: Healing is a difficult and painful process.

“Did you try shutting it down and turning it on again?”

We’ve all heard this phrase when our computer goes haywire. We may have even rolled our eyes thinking it’s too simple. Yet most of the time, all it needs is a good reboot for things to start running. We know this (or at least we think we do). We’ve seen this work over and over again, but the lesson never sticks. The moment things go wrong we throw our hands in the air.

Here’s the kicker. It’s not that the problem’s impossible. It’s that we’re over complicating it. The real question is, “Why do we resist the notion that simple can be so effective?”

Our bodies work very much the same way. When we experience chronic pain, it’s as if the wires are crossed in our nervous system. Bowen therapy gently targets points on the fascia — the soft connective tissue of the body. With precise movements, it stimulates the tissue and nerve pathways. Short breaks in-between allow the body to focus on the injury and repair itself. Instead of using force or pressure, it works with the body’s own healing mechanisms and not against it. All it really needs is a reboot.

There’s a reason why many people are skeptics. Most of the time, they’re only given band-aid solutions for their pain. They’re told to come back for more prescriptions, diet plans and treatments. While they may get temporary relief, it’s not long before they’re suffering again.

What they don’t realize is that the nervous system works more rapidly than any drug. It literally fires information to and from the brain. What Bowen does is ease the flow of traffic, so that this information flows freely. This means the body takes care of the rest of the work on its own. After just three to five sessions, most patients remain pain-free for good.

MYTH #3: Pain is isolated in one part of the body.

Most people think that if their head hurts, it only affects that area. The truth is every single part of our anatomy is interconnected with each other. In order to heal, there needs to be a holistic view of the entire body. This brings the sense of healing to a whole new level.

For example, one dental assistant suffered from chronic migraines. She later learned she actually had a problem with her jaw alignment because of TMJ. Poor posture, especially in the neck and shoulders, further aggravated the symptoms. After the treatments, the pain finally stopped. She also noticed that her posture and overall demeanor also improved.