Psychiatry’s Role in the Suppression of Emotional Symptoms 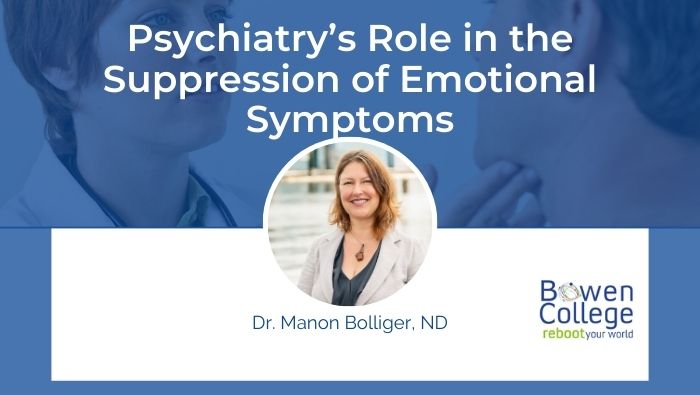 The history of psychiatric medicine offers an illustrative example of just the kind of Cartesian-based misunderstandings about the mind-body connection that leads to ideas about emotional suppression which I discussed in my last post (https://www.bowencollege.com/there-is-no-such-thing-as-emotional-suppression/).

Starting with 125 psychiatric diagnoses, and a very small percentage of people who fit the criteria set by the profession at the time, the main goal was patient management.

As internment in wards was the predominant treatment approach, the drugs used were primarily forms of sedatives that affected the frontal lobes of the brain, making patients docile and easier to manage. Curing a patient’s mental state was not even considered part of the goal. With the advent of Miltown, it was discovered that there was indeed a market for helping people dissociate from their feelings and emotions.

The development of the psychiatric drug industry at the time based itself on a theory that had no science to substantiate it. The hypothesis was that there existed a chemical imbalance in the brain that produced sets of symptoms. The industry took advantage of the creation of many categories of disease the alleviation of which required psychotic drugs. However, neither the actual scientific basis of the drug action nor the chemical imbalances were understood. These categories were conjured up by grouping sets of symptoms in order to create “disease categories.” It is only recently, with the advent of the field of psychoneuroimmunology, that some understanding of the interaction of emotions and biochemistry is developing.

As we’ll see, though, this inauspicious beginning didn’t prevent a certain kind of success for the industry.