Why is Interoception so Significant? 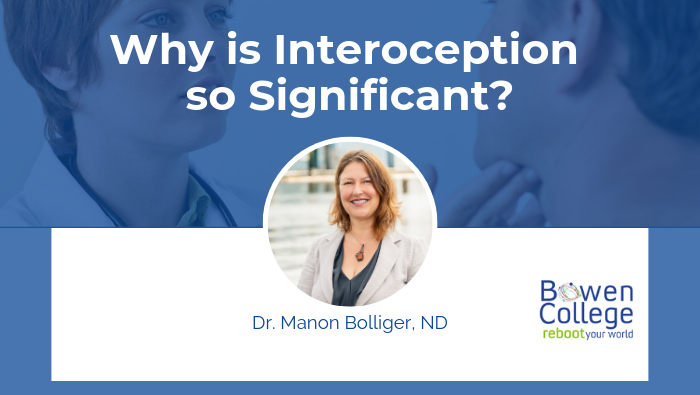 The nervous system extends a vast network of nerves that runs through the fascia, becoming part of the fascia itself. The result is a fluid nervous system with neuropeptides and neurotransmitters that communicate chemical, emotional and biological information from one end of the body to the other. Not only do these nerves provide proprioception, our sense of balance and stability in space, but also something that has been called interoception.

Lisa Feldman Barrett, author of “How Emotions Are Made: The Secret Life of the Brain,” overturns the widely held belief that emotions are housed in different parts of the brain and are universally expressed and recognized. Instead, she has shown that emotion is constructed in the moment, by core systems that interact across the whole brain, aided by a lifetime of learning. Barrett claims that “Our emotions are constructed. They are not reflex reactions.”

This new theory means that you play a much greater role in your emotional life than you ever thought. Basically, 90% of body perception makes a story of what you predict it will be. This is essentially embodied predictive interoception coding. Her book describes how emotions are only 10% of the “gut-brain.”  What differentiates the gut-brain, which is 10% of the entire enteric brain, from the inula is the predictive aspect of the inula. It is the inula which processes our understanding of how we feel in our body (i.e. the subjective sense of our embodiment).

What is interesting is that we actually create our experience upon reliably predictive patterns based on associated memory. The new model of predictive interoceptive coding is not yet fully understood. It’s believed that the amygdala combines the physiological needs with your emotional needs, and then you determine whether you feel good or not. However, as it turns out 90% of body perception is making a story of what you will be feeling.

If the information you get doesn’t contradict what you’re already experiencing, then you continue the story about how terrible your back is, how cold the room is and how much vomiting you experience if you eat certain foods. It is 90% predictive coding and very little to do with the actual food you’ve eaten or the current situation. Rather, it is based on other similar situations. Basically, we seem to be programmed to respond by association rather than a fresh experience.

If you’ve ever had your wisdom teeth removed without anaesthesia, then you understand what the mind is capable of. It triggers pain by the sound of a drill or cracking of a tooth. Through a meditative conscious state, it is possible to alter the pain experience by confronting the predictive patterning and intercept them so that you can actually be in the present moment at which time the pain is almost insignificant.

What does this all mean so far? Simply put, it means that pain doesn’t always correlate with an existing injury or ailment. In fact, it can be triggered by other factors such as emotions or past trauma. Pain itself lingers in the body even though what caused it is long gone. Now that we’ve established this, let’s take a closer look at how this works from a more biological perspective.

The extracellular matrix (ECM) is the immediate environment of all of our 35 to 75 trillion cells. For anything to get in and out of a cell, it must pass through the fascia that the cell is embedded within. When fascia is restricted, cellular transmission is interrupted or shut down completely. Because the ECM is responsive to vibrational energy as a system of communication, when the ground substance becomes denser, clogged, dehydrated or congealed because of fascial restrictions, the polysaccharide ground substance is not as fluid as it should be.

Kendice Pert, who discovered endorphin receptors in the fascia, teaches that information is transmitted in an open web forum of elastin, collagen and polysaccharide ground substance with billions of cells, muscles and sensory nerves.  We used to think that there was only the autonomic nervous system, afferent and efferent nerves and now we realize that there is a vast network of nerves and a nervous system that runs fluidly throughout our body and is part of the fascia.

Interoception is so fundamental to emotional awareness, social skills, decision making, problem solving and self-regulation that it might be the missing link in so many therapeutic interventions.