A Long History of Recognizing the Mind-Body Connection 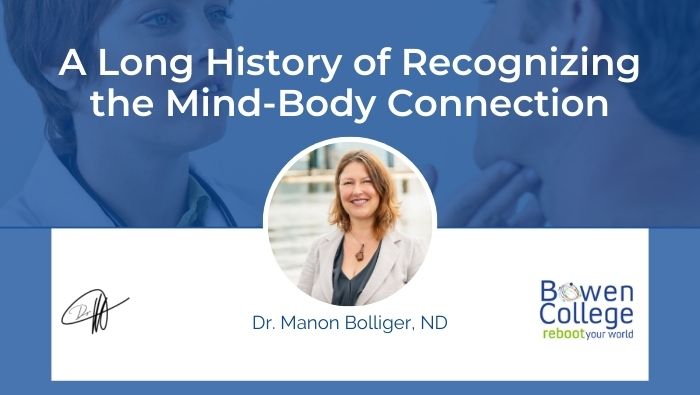 The earliest physicians understood that health encompassed the mind, body and spirit. This insight can be traced back to the 2nd century. with Claudius Galen, an influential Roman physician, who noticed that any part of the body can affect any other part through neural connections, thus establishing the beginning precepts of psychoneuroimmunology.

This relationship between emotional and physical health has been explored and confirmed throughout history, often in contrast to dominant medical practice and philosophy. In one of Plato’s dialogues, Socrates quotes the Thracian doctor Hippocrates’ criticism of his Greek colleagues: “This is the reason why the cure of so many diseases is unknown to the physicians of Hellas; they are ignorant of the whole. For this is the great error of our day in treatment of the human body, that physicians separate the mind from the body.” (Link to source Mate, 2011 p.9)

In the 1800s, French physiologist Claude Bernard coined the concept of the extra-cellular fluid as the “milieu interieur”: literally “the environment within.” Bernard postulated that changes in this internal state were the body’s adaptive responses designed to maintain conditions indispensable to vital activity. “Sickness and death,” he wrote, “are only a dislocation or perturbation of that mechanism.”

Likewise, 19th century French biology professor and researcher, Antoine Bechamp, discussed earlier, talked of the “terrain of the body” and noted the importance of caring for oneself to prevent disease. Advocate of a healthy lifestyle, including wholesome nutrition, a healthy environment, and hygienic cleanliness, Bechamp believed that people do not catch diseases, but in fact create them with what they eat, drink, think and feel. “If we create an unhealthy body, then the crew of scavengers, such as microbes, viruses, and parasites ― what we refer to as “germs” ― come in to clean up the debris.”

The most important contributor to this tradition though was Samuel Hahnemann. We’ll consider his legacy in my next post.