The Context of Care: From Microcosm to Macrocosm 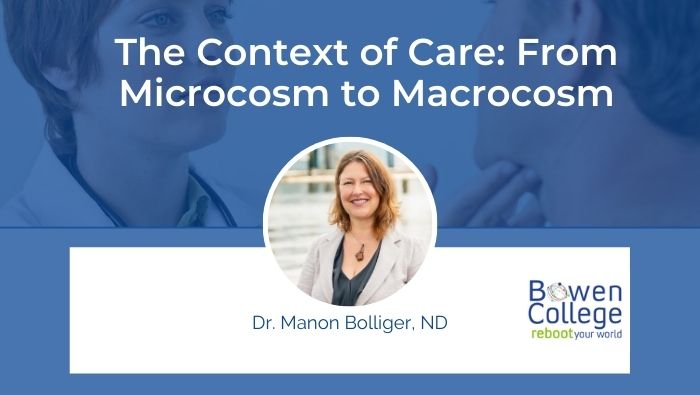 Robert Schleip, research director of the European Rolfing Association in Munich, Germany states, “The more you are able to connect to your own embodied emotions, the better you will be able to read and understand the patient’s facial expressions and signals.”  When I created the LISTEN to Your Body program as an adjunct for physical therapists, I felt the need to establish a somatic connection to our story of experience. I believe that becoming intuitive is an alignment between our emotions and the sensations in our bodies. If our emotions are the results of our thoughts, then it stands to reason that unquestioned thoughts may project a scenario which the body responds to with somatic markers.

Intuition is the act of both projecting a scenario and then listening to the somatic markers — the predictive coding of how you can influence your emotions.

An arbitrary division between the body, mind, spirit and emotions was popularized during the Descartes era of the 17th century. Descartes then took hold of the body and the scaffold to analyze the function of the body and left basically everything else to the church.

Understanding the roots of the separation really helps us understand how cutting into the body without understanding how the body works – how the structures are self-governed and work in synchronicity with and react to impacts upon it – really explains why we have a medicine that believes it is okay to remove organs without fully understanding its direct impact to overall health, nor the impact of the surgical incisions creating scar tissue which impairs optimal function.

I have often said when I work on people that I can hear their bodies speak, and quite literally, this happens through proprioception and interoception. So what is happening when we are using the piezoelectric mechano-trans effect to open up the fascia? According to Donald Ingber from Harvard University,  anytime we touch a body, mechano-transduction infra-red effect happens within 60 to 90 seconds. Our energy and the energy of the person we are working on goes into resonance with one another and creates a closed loop. James Oshman, double PHD in biology and physics, talks about the concept that cells are not “cells within cells” like bags, but they have a 5th dimensional aspect which includes energy transmission.

In fact, the extracellular matrix has established communication systems to cross cell membranes and impact the cell mitochondria and DNA. This is what therapists get excited about because they are well aware that when you touch the body in one part, it can have an impact on all parts. It has also been discovered that in the phospho-lipid bilayer of the cytoplasm, cellular membranes open up into the cytoplasm because they have been triggered or received a vibrational match from their receptor cells’ antennae. The membrane opens up in response to the vibrational energy given off by these ligands of the phospholipid layer. So literally, the body is singing to receptor cells at a certain frequency which is how the cells respond.  All this happens within the extracellular matrix (ECM) in which all the 50 to 70 trillion cells are embedded into and open for communication. This just shows the importance of the need to have a functioning, unobstructed ECM.

Since the ECM is responsive to vibrational energy as a system of communication, one can begin to understand that when this ground substance becomes denser, clogged, dehydrated, or congealed because of fascial restrictions, the polysaccharide ground substance is not as fluid as it should be and health maintenance can be obstructed.

Another fascinating element is that the fascia has a scaffolding which looks like fractal arrangements in the nucleus of the cytoplasm. Basically, everything inside our bodies is very much the same as outside in the cosmos.  For instance, in one experiment when clean pancreatic cells were placed in a petri dish, nothing happened.  But when the pancreatic cells were left in their cytoplasm with their scaffolding intact, the fascia around the cells then would multiply.  This demonstrates that it is not the thing itself, in this case the pancreatic cell, but rather the cell within its proper context and environment that has a life of its own.

This is the fundamental break with the two-dimensional Cartesian outlook of biology which excludes important unseen variables just because it’s not yet fully understood. Not long ago, modern medicine used to consider tonsils and appendixes as “junk” organs, and the fascia used to be seen as a non-living matrix. Even now, the part of the DNA that is not understood is called “junk” DNA. In reality, there’s more to our health than just the physical body. It’s crucial to understand health in a holistic context with the mental, emotional and physical aspects working together.