The Righteous Indignation of the Dominant Paradigm at Work 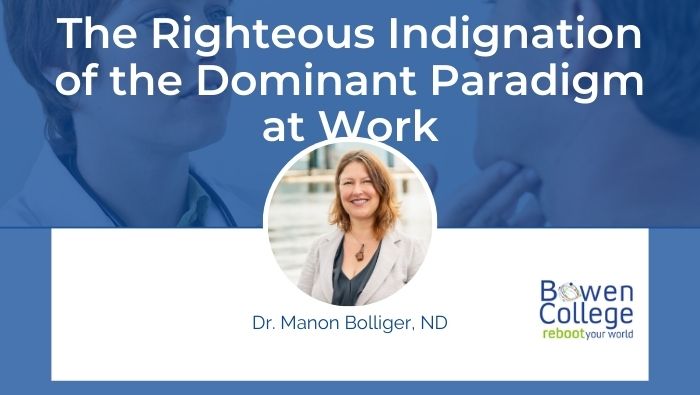 In my last post I told the terrible story of how I was cut off (from a socialized health care system which I support with my taxes, despite my disapproval of so many of its methods) from the option of monitoring results from of the treatment for my stage 4 cancer that I chose for myself. This was an awful experience that reveals the misplaced moral righteousness of some who occupy the mainstream of the dominant paradigm’s health care model.

Without the ability to monitor results, I would have no way of knowing what was and wasn’t working. In effects, I’d be left guessing in the dark. To be denied such monitoring would be no less a death sentence than failure to accept the hysterectomy was supposed to be. And of course if I had died, it would have been blamed on the cancer and my irresponsible choice. Not a public health care system that ostracizes and effectively abandons to die those who question it.

Subsequently, however, to my great relief, I found a gynecologist and oncologist, trained with a wider perspective on how the body heals and what it requires to do so.

She was willing to monitor me and distinguish between an inflammatory and a fixed morbid state. Because I was being monitored I was able to support my body in re-establishing homeostasis and could monitor the inflammatory response advantageously and help my body re-establish an environment that was more conducive to health. I am (thankfully) still around.