The Ugly Little Secret about Antidepressants and Relapse 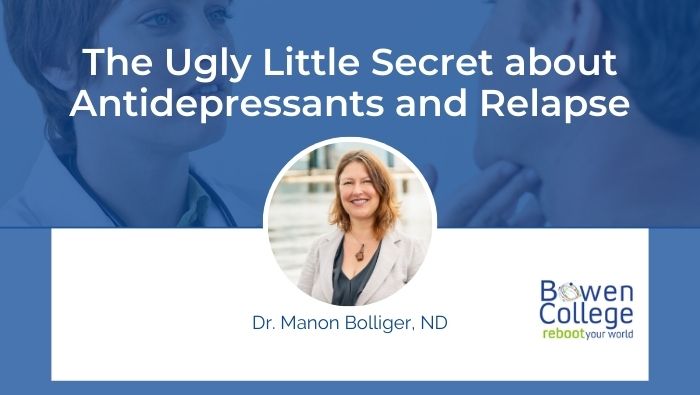 Let’s refocus discussion on the therapeutic effects on patients. Evolutionary psychologist Paul Andrews, an assistant professor in the Department of Psychology, Neuroscience & Behaviour, is the lead author of a 2011 article in the journal Frontiers of Psychology. He analyzes common psychiatric practices, concluding that patients who used antidepressants were nearly twice as susceptible to future episodes of major depression. Meta-analysis suggests that people who have not taken any medication have 25% relapse risk, compared to 42% or higher for those who discontinue an antidepressant.

Similar research conducted under the “TeenScreen” Program conducted in the USA. The program claims that identifying and treating “at risk” children can prevent suicide.  Dr. David Healy and Graham Aldred, from the Department of Psychological Medicine, Cardiff University, reviewed published SSRI antidepressant reports and found quite the opposite: there was an increase of suicide risk.

“Depression screening” in the general community accounts for 60 million prescriptions for antidepressants written in the U.S. That’s 10% of the population, including 1.5 million children.”  (Glenmullen, 2000) It should come as no surprise that these surveys were funded by pharmaceutical companies. (Pringle, 2006).

My clinical experience reflects these findings. Doctors too readily prescribe anti-depressants, which produce a cascade of symptoms that put the patient in a worse predicament. The situation is further exacerbated by the difficult and emotionally disturbing withdrawal symptoms so many experience if they decide to choose a drug-free route.

In my next post I’ll examine more closely what’s entailed in the use of these anti-depressants.