My Story with MS: Its Emotional Resolution 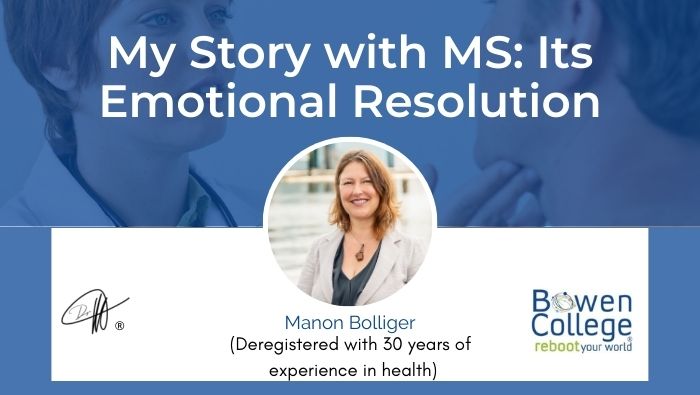 I ended my last post commenting on how my treatment for MS helped change my perspective on my marriage. It allowed me to emotionally separate from my husband and to realize that he was likely going through a process that was truly his own and which had nothing to do with me. I could now accept that he required space to experience that.

Not having clear boundaries at the time, I believed that his experience was directly related to mine. That is why I had taken things so personally before the onset of the disease. For example, if he was withdrawn, I would take it as a form of rejection. If he was sad, I’d be sad, even though I didn’t know why. And if he was happy, I was certain I had done something to make it so. Basically, I was passively enmeshed in my perception of his reality; my nervous system was stuck in a reactive mode, and I no longer could trust myself to “stand” independently.

Over the past 17 years, I have had three recurrences of these symptoms, each one corresponding to a period of perceived stress. Each time it was gone in less than a week, and twice in just two days; all I had to do was remind my being and system of the “state” I was revisiting.

The predisposition to view the world as I originally did still lives in me, but today it clearly is a “recognizable state.” I no longer confuse it as a reflection of all of me. It no longer defines me, in the same way that the symptoms of MS serve as a reminder of that fragility, but do not define how my body needs to act.